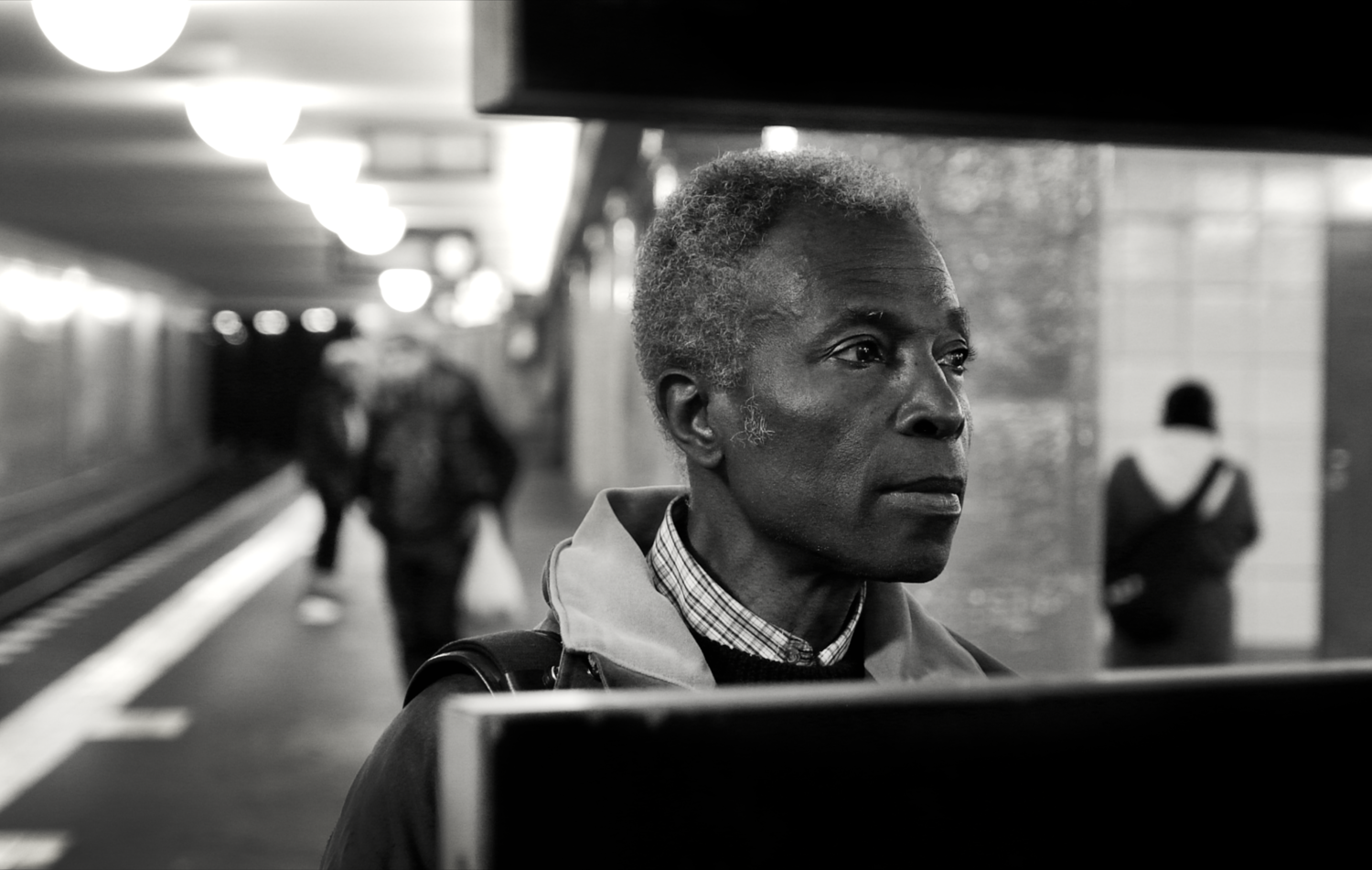 I write down these thoughts as a continuation of reflections triggered by a podcast conversation between Emeka Okereke and Akinbode Akinbiyi.

I was struck deeply by the theme and the terrain their conversation explored – I wonder as I wander. A conversation between creatives is itself a work of art. But this one conversation is centered around Akinbiyi’s life journey, with a focus on how his vocation shaped his life as a creative. Akinbiyi’s journey though touched quite lightly is in essence very provoking.

I was moved by this conversation, inwards. To my own personal journey through my different identities. I think of identity as a journey, and not a destination. A constantly shifting goal post. One wanders and wonders about oneself for an entire lifetime. While listening, I was transported back to another time in my life, driving into a Northern Nigerian town where I captured a rusted sign-post reading ‘Welcome to Zungeru, the forgotten capital of Northern Nigeria’. It was in this small empty town in the Northern Nigeria region that I first encountered the Shia Islamic faction.

For many days I wondered about how the different students I had met, some who had become friends, coursemates, and even roommates, performed a small ritual after our Magrib prayers. How they danced to a mantra in rhythm and beat their chests in a frenzy – often falling to the ground as though overtaken by the effects of a strong hallucinogen. Here in the middle of nowhere, I saw a different Islam.

I recognize this as a pivotal moment because it made me start to define myself as a Sunni Muslim. It would be many years before I discovered that these differences were more structural and political than they were philosophical. Just as one travels daily in the physical world, we also make long journeys inside our minds, and these wanderings are inward journeys to help us understand ourselves, our lives, and our realities.

Akinbiyi speaks as a man who makes no claim, and yet, has understood his journey. The zenith of our life often is the end of all reflections of life as we close the books. When asked about what was greater than a king, an emperor, or a warrior, the Indian sage *** answers with the words ‘A traveler who has reached the end of his journey’

Akinbiyi speaks of his journey as an inward movement: Reading has been my entry into the ‘so-called’ creative field.

I walk silently behind him as he traces his journey through memories to his desire to wander through streets and a love for books. It is a podcast, and I am listening not to him but to information digitized and stored in a cloud system. Yet, even at this distance, one can see how reading and wandering are both acts that are in themselves a traversing – one in the material and the other in the non-material world. Activities that contribute to the expansion of the inner and outer worlds. A form of creation.

Learning is perhaps the most essential part of being creative. Immersing, and then expressing. One becomes part of a thing by first attempting to know it, expanding for themselves on what is known, and then contributing to the shaping of what is ‘knowledge’ around that subject by using a different medium to express them.

“In walking, I am constantly aware of where my feet are. In my case, my roots are my parents. The identity of my parents has shaped me a lot. My feet are firmly placed on the ground, and I wonder as I work. I have realized how very intimate and close the globe is. I can be anywhere and still feel close to other places.” – Akinbode Akinbiyi

In my ears, his words describe how one finds their own identity or parts of it, and then uses these fragments as grounding tools. Tools that can then afterward be deployed as transportation devices towards exploring and understanding the outer world. I can hear my father speaking about learning as a way of giving hand tools to your mind. Also, I can hear how having learned, one is moved to share.

It comes as no surprise to hear that though Akinbiyi begins this journey as a student of English, the desire to become a writer shifts into Photography. Both mediums are strong forms of expression. I know a bit about this as well, beginning my career as an accountant and traversing into journalism – a journey of numbers to words.

But there is a hidden tombstone here. Even though these life choices have undefined boundaries in our minds, when we exceed these boundaries, we recognize that we are in new territory. Akinbiyi speaks of his journey to and through Festac 77 and how this shaped him. He also highlights that buying a single piece of equipment with a huge amount of money served as a turning point.

Totems of the Creative

How do we say what our minds tell us? How do we navigate through experiences aimed at bringing greater understanding to some of the most perplexing moments in our own lives and the world around us? A short form of describing this is in the word Process.

An artist’s journey begins and sometimes ends, when they understand what it means – and how – to bring intelligence to the creative spirit. An understanding, that to some degree, introduces cognizance to the realm of magic.

This magic he explores with unpatterned methodology:

“If you focus on a particular thing, you already have a sequence going, and in that sequence, you can tell a narrative.”

I am drawn to how he weaves his methodologies alongside ancient Yoruba mathematical concepts of building a relationship with an element if they encounter it four times. Here Akinbiyi hints at the role of ancient Numerology in the making of new things.

“If a thing repeats at this number of times – then I start to prepare for seeing it and making an image of it. It is trying to get a sense of rhythm and balance and find some patterns and peculiarities in this.”

I am intrigued by how he allows himself to be somewhere so silently he almost becomes invisible and in his description of the art of ‘listening-in’ – a journey of searching for the muse within and allowing the experience to organize itself inside out. He reiterates this in the words:

Squarely, I did not fully understand this. I reflected on how perhaps living in an ordered society may have helped to put his thoughts and emotions in a more sequential order. Whether his birth to well-profiled parents, his time at the library at the University of Ibadan, and much of his experience living in the West had initiated him into a life of organizing things. Also, because the journey from numbers to words was a big shift for me. I have often thought of the artistic process as being also largely craft-based. Writing comes to me as an art, but also a craft where imagination alone is not enough. There is often the mechanical chiseling of ideas into words, sentences, and paragraphs.

But my journey has also taught me that mastery allows people to develop new and unfamiliar approaches as they disentangle old ways of doing things. If I ever meet Akinbode, I will be sure to ask him about this.

Akinbiyi explores the journey of expression through strange and yet familiar routes:

“Visually people see things in their mother tongue, but when they want to express them, they use the colonial languages – we are in a kind of schizophrenic situation. We are Africans, but then we have this layer of colonial heritage and way of being that is very distorting.”

It is at this junction things become differently interesting. I was curious at the start of the conversation about how other non-controllable elements had shaped him. Like many young people living in the West, watching the endless digital depictions of differences between people of different colors, a part of me was curious to hear from him about racism.

Perhaps it is good to expand on this curiosity with a personal example. After six months of living in Brussels, I was asked by a friend how it is In-the-abroad? I answered him that I was happy there was constant power. Of course, I did not speak of the absence of a seemingly predatorial government eating its children as in many African countries or the many other experiences that account for huge differences in life expectancy between the Global North and the Global south. I was very specific to the most troubling aspect of my life in Nigeria, electricity. But the person to whom I replied asked: I hope there is no racism in the area you are in?

His response was a reminder that even in 2021, the darker parts of our cognitive systems are still at work, and even in this age, tribalism, ethnicity, and race are very much alive.

Listening to Akinbiyi, I thought to myself, now, here is a man, uniquely evolved. An African born into a Nigerian family in Oxford – long before this modern era of digital racism, before the Black Lives Matter protests, even before Nigeria was an independent nation. How did a man such as this, set himself upon the course of becoming a Creative? And how did he navigate the conversation around race?

Perhaps he did not direct this phrase to my mind’s inquiry, but one line in his words struck me as a form of baptism on the subject of othering:

“In all these configurations, the one thing that is really damaged is the human being.”

I resonate strongly with this.

Starting my journey in that small town of Zungeru, curious about the Shia, I read how over a century ago Arab politicians trying to convert Islam into a hereditary dynasty beheaded Husayn, a direct grandson of Prophet Muhammad, and how his life as a freedom fighter gave birth to the Shi’a movement. I became a different Muslim after my journey through Zungeru, perhaps a more tolerant one. It is in this same town where I would later discover Nigerian politicians David Mark, Nnamdi Azikiwe and Ojukwu had been born.

Listen to the full podcast here